The complete set is available in LARGE, MEDIUM & SMALL versions. 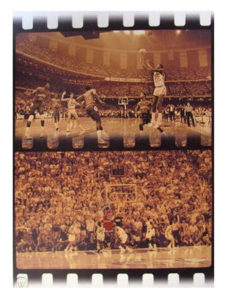 Michael always said that he became Michael Jordan the moment he hit the game-winning shot to beat Georgetown for the 1982 NCAA title.

Michael fell asleep on the bus to the arena. He had a dream about hitting a game-winning shot ?in a game, not necessarily that day?s game.? After the game, the first thing his father, James, said to Michael was, ?Son, your life will never be the same after today.?

The day before he hit the shot to beat Utah in Game 6 of the 1998 NBA Finals, which is the second shot on the lithograph, I was in his hotel suite in Salt Lake City. We were finalizing ?For the Love of the Game? and I kept asking him how he processed the most crucial moments of a game.

I kept pressing. Finally, I provided a scenario: There are five seconds left, you are losing by a point and it?s a timeout. What are you thinking about? The more I pushed, the more perplexed he became.

Finally, he moved up to the edge of the chair and said, ?Are you asking me am whether I?m thinking about missing the shot? Why would I think about missing a shot I haven?t even taken yet??

My only response: ?That?s why you are Michael Jordan and no one else is.?

Michael wrote the poem during the 1998 championship run. Before the playoffs started coach Phil Jackson spoke to the team about the journey they had been on together and the recognition that this would be the last go-around as a unit and that they should think hard about what has transpired, then write something to share with the group once the season, The Last Dance?as Phil named it, ended.

Win or lose, said Phil, we will gather one last time when the season is over.

Michael was the only player to take the time to write anything. And he was the only one to read his thoughts aloud when the team gathered for the last time following the 1998 Finals.

This poem has appeared in only two places ? in Michael?s book and on this lithograph. 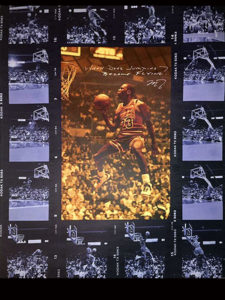 During the creation of ?For the Love of the Game,? Michael?s best-selling autobiographical account of his playing days, these photographs were found.

The shots were taken by noted NBA photographer Nathaniel Butler at the 1987- 1988 Slam Dunk Competition in Seattle. They were found in the drawer Nat?s desk. We used them in the book, then we turned them into a collage for the lithograph.

The quote is Michael?s and is written in his own hand (as are all other words on the lithographs). When Michael saw the images, he asked the question: When does jumping become flying?